Endowed with exceptional qualities and moreover having received a remarkable education, Eustatiu Stoenescu created an oeuvre, which focused attention on him on three continents: Europe, North America an Asia. Thus, his participation in the great exhibitions of the time or his one-man shows in Paris, Venice, New York, London, Rome, Geneva, Bucharest etc. brought him the unanimous appreciation of experts, critics, the press and the art collectors. Numerous prizes, special honours as well as the purchase of his paintings for great museums and private collections from France, Italy, the USA, Great Britain, Belgium, and Holland etc. established him internationally. He was born in 1884, in Craiova, Romania and he died in 1957 in New York. 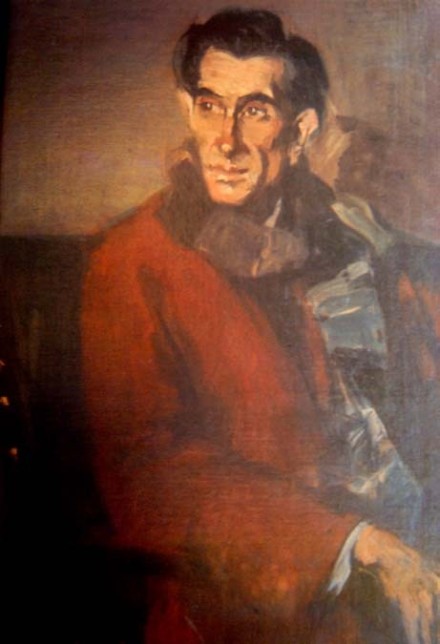 A painter about whom one can doubtlessly state that he created his own style, Eustatiu Stoenescu lent to his work homogeneousness, force and character, without ever trying to demonstrate his capacity to innovate, succeeded in achieving and asserting his originality.

As unanimously known, Stoenescu was a great portraitist. In Romania, as well as abroad, he was acknowledged as the artist who made the portraits of different officials, state leaders, members of the aristocracy, of wealthy intellectuals, of fashionable, distinguished ladies. He made them quickly, without endless sessions. He was a virtuoso, a magician of the brush. When referring to Stoenescu´s talent, Theodor Pallady once said rather maliciously that “unfortunately he has too much of it…”, while on another occasion, he said that “when you have got talent, you do what you want, when you have genius, you do want you can”. “Stoenescu´s portraits compel recognition, in terms of consummate execution, offhanded touch and spontaneous inspiration. Attentive to psychological details, the painter proved capable to transcribe reality faithfully, to select the essential and subordinate colouristic effects to expressiveness. Painted in a wide range of styles, with an extraordinary verve, his portraits illustrate the talent of a gifted artist, to capture, with no hesitation, and to define clearly the universe of a human face as well as to concentrate, into a single image, the history of a lifetime.” (Paul Rezeanu, Eustatiu Soenescu, Bucharest, 1998)

Such is the portrait of the great Romanian writer Panait Istrati, painted in a nervous, a robust drawing, a parsimonious colour range in which he managed more than ever to reveal the secrets of the latter’s soul, through a keen sense of observation.

Panait Istrati (1884—1935) was nicknamed The Maxim Gorky of the Bal- kans. He was the son of a Greek smuggler and a Romanian peasant woman and grew up among peasants, fishermen, sailors and vagabonds in Galatz, Romania, (near the Danube Delta). He became himself a harmless vagabond, worked and bummed his way all around the Mediterranean including the Middle East and wrote in the meantime enchanting short stories and novels in his beautiful self-taught French language about the people he knew: Romanians, Greeks, Arabs, Jews, etc. A fellow traveller for a while, Istrati visited the USSR in the 1920s together with his (later Nobel Prize winner) friend Nikos Kazantsakis. Istrati left the USSR completely disillusioned and wrote a book about it. His writing success began when he wrote to the French writer he admired most, Romain Rolland, with whom he had tried to get in touch for long. Rolland immediately replied to this letter. In 1923 Istrati’s story Kyra Kyralina was published (with a preface by Rolland). It became the first in his Adrien Zograffi literary cycle. Rolland was fascinated with Istrati’s adventurous life, urging him to write more and publishing part of his works in the magazine he and Henri Barbusse owned, Clarté. The next major work by Istrati was Codine. Romain Rolland considered him a wonderful story-teller and ever since, Istrati has been on the list of popular French classics. He belongs both to Romanian and French literary universes. He is one the most translated Romanian writers in all major languages.